The Central West Type 3 IMT assumed command of the Cornville Fire Monday evening, which has grown to 1,241 acres just east of the Cornville community and is currently zero percent contained.

The wildfire, reported on Sunday at about 12:30 p.m., was mistakenly reported that it originated from a structure on fire on private property. Investigators have found that the origin of the fire actually began on national forest land and rapidly grew throughout Sunday, encroaching upon private land.

The fire activity for Monday was minimal and burned away from homes and populated areas, while firefighters worked to secure lines around Cornville.

Firefighters patrolled the fire lines overnight and will be focusing today on the northern and eastern flanks to keep the fire from progressing any further.

Extremely warm temperatures and windy conditions will persist throughout the next several days and will challenge firefighters as they work to increase containment of the fire and keep it from moving or growing any further.

There are currently no evacuations or structures threatened, but residents in the area are encouraged to remained prepared and be ready to evacuate if necessary. 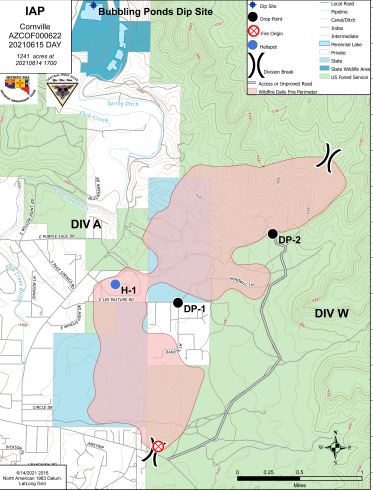