Firefighters continued to make progress on the Tunnel Fire Tuesday. As a result, containment of the fire increased to 30 percent. The near-critical fire weather conditions were less severe than anticipated, with only breezy southwest winds and cooler temperatures due to cloud cover that remained over the fire area for much of the day.

Crews working along Forest Roads 420 and 545, and in the Timberline and Wupaki Trails communities patrolled the fireline, backhauled equipment no longer in use, and mopped-up where needed to remove any heat sources near the fireline. Firefighters patrolling in the Black Mountain and Strawberry Crater Wilderness Areas continued to mop-up the fire’s edge to ensure any heat within the fire’s perimeter is not a threat to the control features in place. No helicopter bucket drops were flown on Tuesday; however, a reconnaissance flight confirmed the decrease in acreage south of Darton Dome reported yesterday.

Weather: Early morning cloud cover will clear the area around 9 a.m. leading to near-critical fire weather conditions. As the clouds dissipate, sustained southwests will be 20 to 25 miles per hour and gusting to 35 miles per hour. Temperatures will be in the low-70s, and relative humidity values will remain low at about ten percent. Thursday is expected to be a critical fire weather day with a Red Flag Warning possible. The low-pressure trough will move out of the area Thursday night, resulting in lighter winds on Friday.

Today’s Activities: Firefighters remain vigilant for increased winds that are anticipated as the cloud cover clears the area in the morning. Much of the fire will be in patrol status as crews continue to engage around the entire fire perimeter ensuring that there are no heat sources that could threaten the containment. On the northeast portion of the fire, east of Strawberry Crater, firefighters will continue to mop-up in those areas still showing signs of heat. Equipment no longer needed on the fireline will be taken off the line to be refurbished so that it is ready for use on other incidents. Crews will also begin to repair disturbances that resulted from suppression efforts during the Tunnel Fire.

Closures: The Coconino National Forest has instituted a Forest Closure Order for the area affected by the Tunnel Fire. 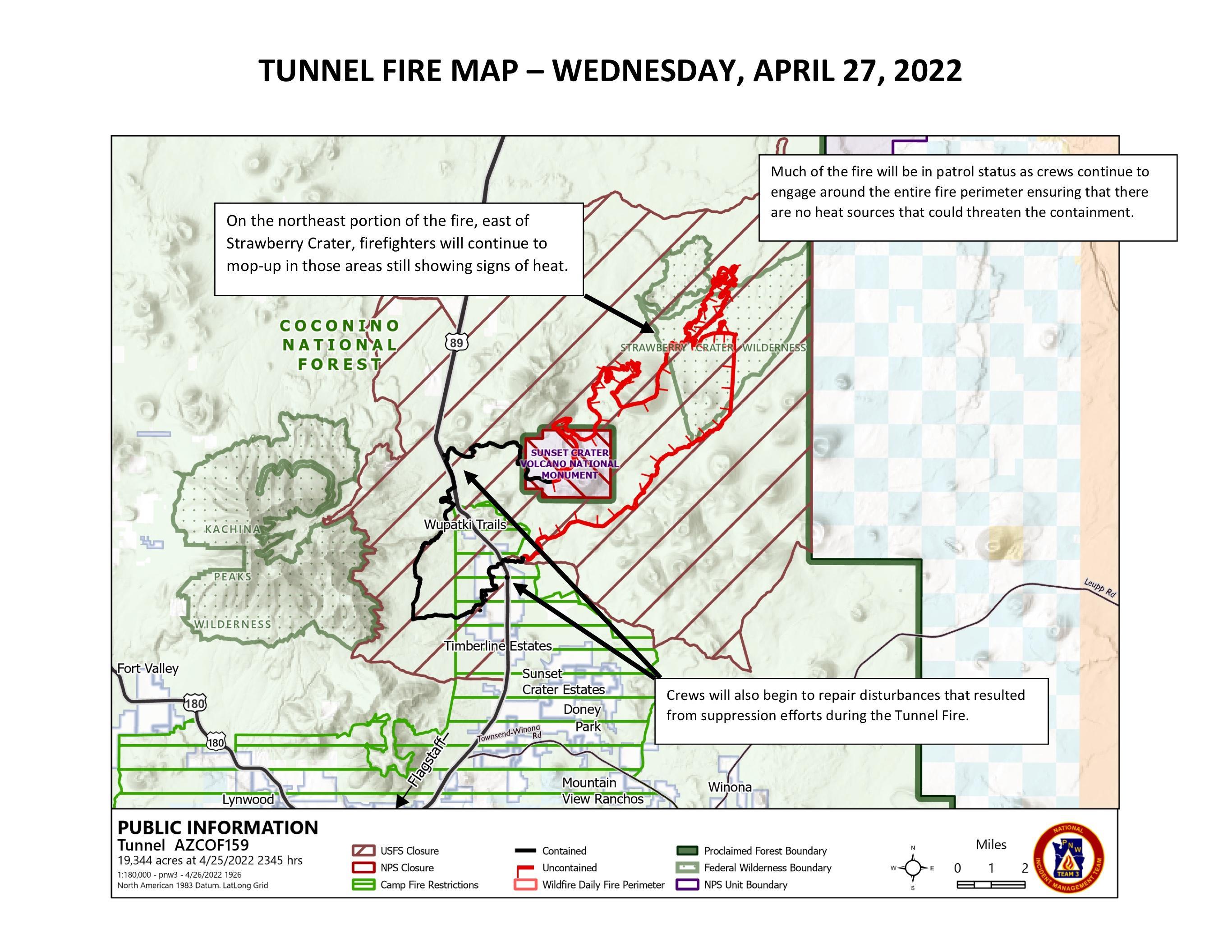