TODAY: Moderate fire behavior is expected today on the Contreras Fire. Humid conditions and the possibility of wetting thunderstorms will likely reduce fire behavior and growth. There is still the potential for new fire starts from lightning strikes with the incoming afternoon rain. Shifting weather patterns will bring short, erratic wind gusts, potentially pushing the fire into open grasses and brush in the lower elevations and flats where fire is more easily accessible and defendable. Existing retardant and handline construction is expected to continue to hold the fire south of Highway 86. On Kitt Peak, mop-up and assessment of building and scientific structures will be the priority. Most fire activity is expected to occur within the interior of completed control lines south of Highway 86 and west of Sasabe Road (west of Pan Tak and the Coyote Mountain Wilderness). Smoke could impact Highway 86 and the Pan Tak and Hayhook Estates communities. The south part of the fire is in monitor status. Suppression repair activities will continue in and around the area of Elkhorn Ranch and elsewhere along the south perimeter of the fire. Crews are scouting for any damage from suppression activities. These activities could potentially include debris removal, fence and gate repair, restoration of dozer lines, and the construction of water bars to reduce the flow of water that could create future washouts and road degradation.

Short, intense periods of rainfall in the coming days have the potential to cause flash flooding that could impact roads in and around the fire perimeter. Drivers are encouraged to remain vigilant to flash flooding across roads, especially interior roads, and to increased emergency response traffic in the area.

YESTERDAY: Yesterday, control line was completed around the south half of the fire. Suppression repair and mop-up of any remaining hot spots was the priority. In the north portion of the fire, ground crews were aided by heavy air operations dropping retardant and water to keep the fire south of Highway 86 and west of Pan Tak. Retardant lines from the prior operational period held well, allowing crews to focus on defensive firing operations below Kitt Peak Observatory. Crews stationed in Pan Tak and Hayhook Estates developed structure protection plan for those communities. West of Pan Tak and Pan Tak Pass, dozers and hand crews worked through the night using defensive firing operations to establish completed control lines south of Highway 86 and west of Sasabe Road (west of Pan Tak and the Coyote Mountain Wilderness) that connect to the existing fire perimeter. 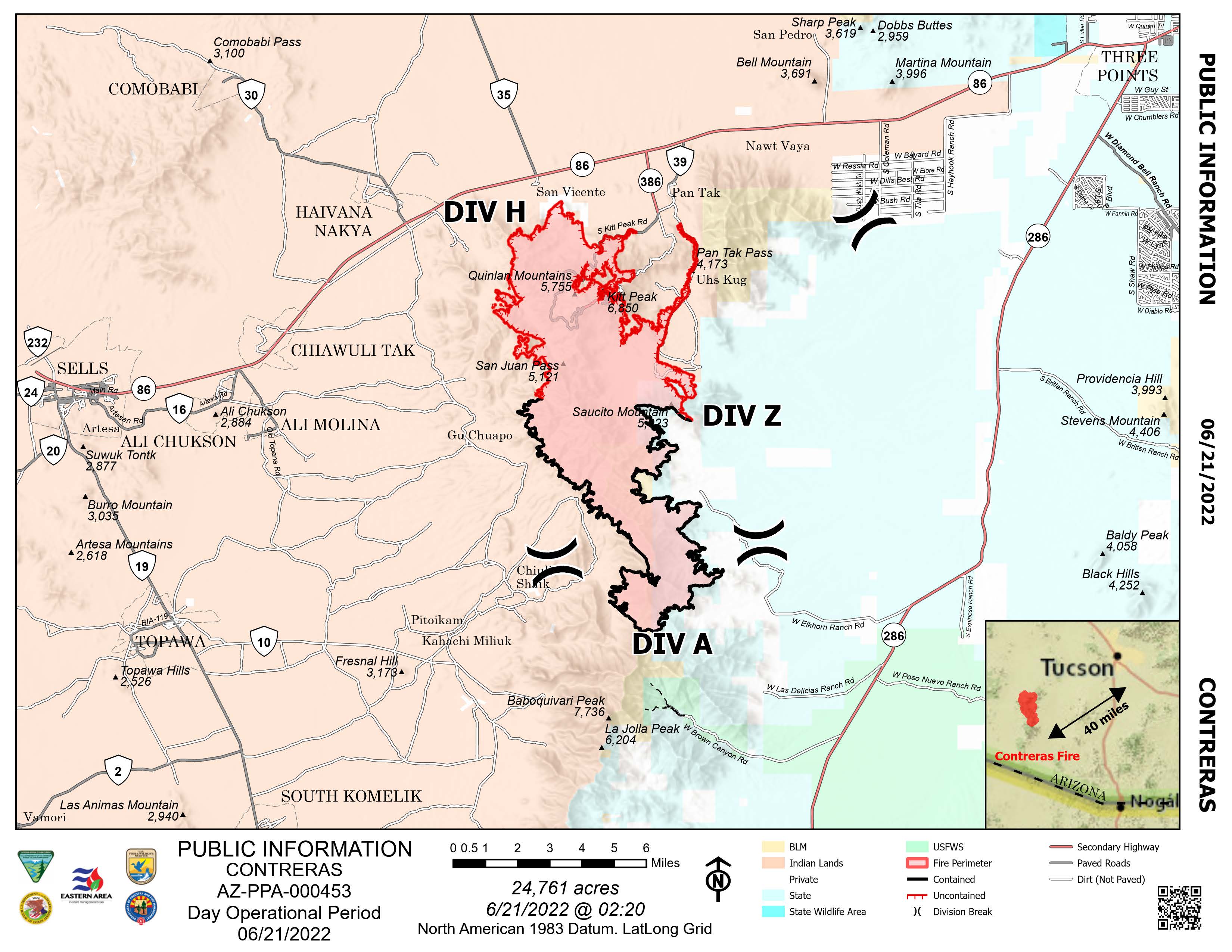