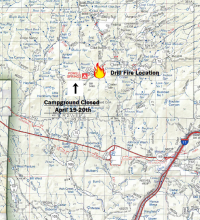 The evacuation for the community of Mayer will be lifted as of 10:00am Thursday, June 29th.  Please note there are significant road closures still in place.

Access to the community of Mayer will ONLY be from the south.  SR69 will be open from I-17 north to Central Avenue in Mayer.  SR69 will be closed at Central Avenue to all traffic heading north.  To the north, the other closure point for SR69 remains in effect at the intersection of SR169 and SR69.  No southbound traffic will be allowed on SR69 south of SR169.  The High Chaparral community and Poland Junction, both east and west of SR69, are still under full evacuation.

The closure for SR69 remains necessary as firefighters will be completing burnout operations along the roadway north of Poland Junction.  These actions are required to create a fire break to help protect the communities to the north.

All cooperating partners involved in the closure and firefighting operations wish to thank the community for their patience and understanding.  They realize the inconvenience created by evacuations and are working diligently to open communities as soon as safely possible.

DRONE INTRUSION OVER THE FIRE: Aircraft are one of the primary tools being used for fighting this fire including structure protection. Yesterday air operations were shut down due to the intrusion of an unmanned aircraft system (UAS) or “drone” in the airspace associated with the fire causing the immediate grounding of all firefighting aircraft and potentially endangering the lives of the firefighters while limiting their ability to protect the community. There is a Temporary Flight Restriction (TFR) over the fire area and it is illegal to fly a drone within the restricted area. Violators will be prosecuted to the fullest extent of the law. To maintain a safe environment for the aircraft, pilots, and ground crews, it is imperative that the air be clear of other craft, including UAS. The community is reminded that “if you fly, we can’t fly.”

The Incident Management Team and all of the Agency Cooperators are keenly aware of the tremendous impacts to the community from the closures associated with the fire. These closures are essential to provide for both public and firefighter safety in the midst of the many moving parts associated with fighting this fire.

Last night firefighters benefited from lower temperatures and higher relative humidity which reduced fire intensity. Fire is backing down slope in the ponderosa pine on the north side of Big Bug Mesa and had little activity in the brush. The fire did cross the 58 Road along Big Bug Creek.

The north side of the fire continues to be the most active area for firefighters. Crews will be assessing structure protection needs in Walker and Potato Patch today as well as continuing efforts in Breezy Pines. Tactical options are being developed on the north side of the fire. The anticipation of favorable weather conditions today will allow firefighters to make progress in several areas around the perimeter.

A shelter has been set up at the Bradshaw Mountain High School, 6000 E Long Look Drive in Prescott Valley off of Glassford Hill Rd.

A Pre-evacuation is in effect for Orme School.

For additional information regarding evacuations and pre-evacuations please call the Yavapai County Emergency Operation Center at (928) 442-5103, 7am – 7pm.