Highway 180 has reopened following a week-long closure caused by the Slate Fire, which is located 23 miles northwest of Flagstaff and is now at 11,012 acres and at 16 percent containment.

While Highway 180 has reopened, motorists are asked to reduce their speeds and keep an eye out for crews still working in the area. Additional portions of the Coconino National Forest are closed to the public for safety reasons.

Adverse wind shifts Monday contributed to the spread of the fire, and crews spent the day using engines, hand crews, dozers, and helicopter water bucket drops to tend to spot fires on the south side of the fire.

Crews also took advantage of adverse winds by running a line of retardant on the west side of Missouri Bill Hill, followed by dozer and crew work Monday night in an effort to protect firefighter safety.

Crews plan to spend Tuesday continuing to secure Cedar Ranch with two engines while putting water on hot spots in the area. Additionally, resources will likely be relocated from the west side of Highway 180 to the southeast side of the fire. Work is still being done to survey archaeological sites in the area.

Several recreation sites in the area remain closed, including the Red Mountain and Slate Mountain trailheads, Kendrick Cabin and a portion of the Arizona Trail from Kelly Tank (mile 603.3) to Cedar Ranch (mile 616.2). A Forest Order was also issued over the weekend to close nearby parts of the Coconino National Forest.

The fire was called in by a Coconino County Sheriff's Officer at 3 a.m., and the cause is still under investigation.
﻿
Details about the Slate Fire will be posted on InciWeb, as well as Facebook and Twitter. 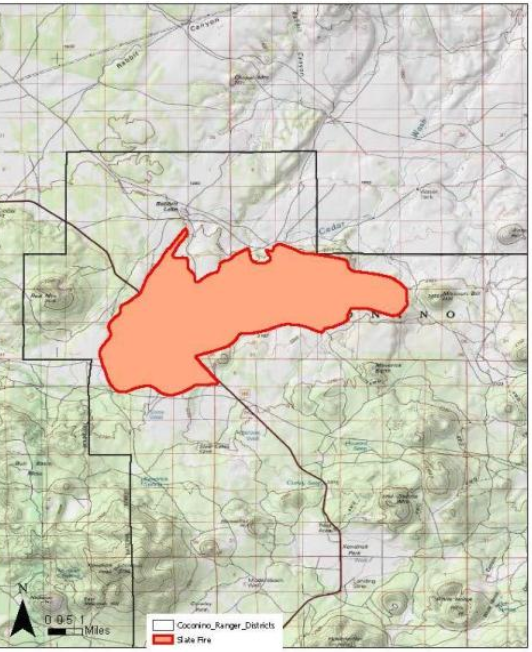