There has been no new growth on the Committee Fire, located east of Sedona, within the past day due to a combination of crew work and weather conditions.

The fire is still estimated at 300 acres. Mapping is currently being conducted via a combination of infrared flights, an Unmanned Aircraft System and perimeter walking.

There have been no changes in fire behavior within the past day. Containment is still 0 percent while crews and aerial resources continue to establish and secure line.

Monday operations included ground and aerial work. Air resources dropped retardant Monday evening. Earlier in the day, helicopters shuttled firefighters to the top of the mesa to conduct ground operations throughout the day in addition to performing bucket drops along the steep edges of Jacks Canyon.

There is a 20 percent chance of precipitation with a slight chance of thunderstorms Monday afternoon.

Individuals are asked to refrain from flying drones anywhere around the fire's perimeter due to the large number of aerial resources working on the Committee Fire. If drones are present, all forest aircraft must be grounded, which hinders firefighting efforts.

Smoke will continue to be visible from the Sedona area. No structures are threatened at this time.

An updated closure order has been issued for various roads and trails in the fire area. Closures may update at any time.

The fire was reported at 12:20 p.m. Friday and was likely caused by lightning. 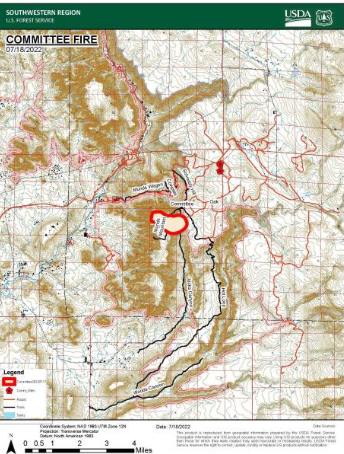